1: Scout your location before your shoot

You’ll be arriving in the dark, so it’s a great idea to know the location and plan your shot before you get there.

Whether it’s the day before, or longer, spend some time getting to know the location. Take some “test shots” on your phone to see what compositions work so you can easily refer to them on the day of the shoot.

The sun will be an important element during your shoot, so it’s also a good idea to know where exactly it will rise. The good news is you can research this using an app called the Photographers Ephemeris.

2: Arrive in plenty of time

If you’re getting up early enough to shoot a sunrise, then you might as well go all out and get up extra early to give yourself enough time to prepare when you turn up. Not only will you be more relaxed because you won’t have to rush around to find that great composition you planned last time, but if you’re lucky with the conditions then the glow from first light (half an hour before sunrise) can produce the most intense colours in the sky.

3: Know your camera inside out

Again, you’ll be shooting mostly in the dark, so being able to change your shutter speed, aperture, ISO, focal length, focus modes etc without looking is going to save you untold amounts of time and stress!

Sunrise scenes are full of contrast with the bright sun creating the darkest shadows across the scene. Even as camera processors improve and are able to record wider and wider dynamic ranges in one shot, some scenes will ALWAYS be too much for any camera to capture in one. This means that you’ll either end up with over exposed highlights or under exposed shadows, both of which are not good if you want to produce the best possible sunrise photo.

So shoot multiple bracketed exposures to capture the entire dynamic range across as many exposures as you need. Then you’ll be able to combine them into one high dynamic range shot in Photoshop later. 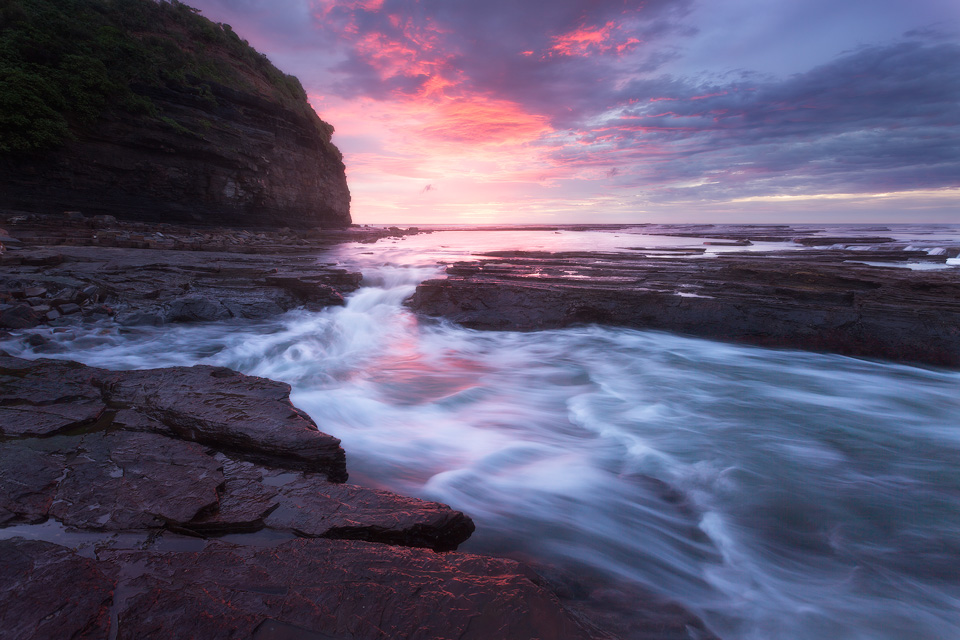 5: Remember to choose a great composition

When the sky is afire with beautiful sunrise colours, it’s easy to forget that an amazing sunrise alone doesn’t make a great photo.

It still has to be a great photo! This means not only choosing a great composition, but making sure every other technical element (focus, exposure etc) is on point too.

6: Always look behind you

I like to give this tip often, no matter what time of day or landscape subject I’m talking about. But it’s especially important when photographing sunrises.

After you’ve got a few shots in the bag, take a moment to look behind you. It’s surprising what the sun can do to the sky on the opposite horizon to where it’s rising from.

7: Remember to be in the moment

This isn’t a technical tip, but it’s probably just as important as any of the others in this list.

The result is that you end up experiencing the whole morning through your viewfinder and when you get home, you never really remember what it was like to SEE it.

So after you’ve taken a shot or two, step back from your camera and take a deep breath. Look around. Soak up the scene and really feel it.

Not only will it help you be present in the moment and actually enjoy the experience, but it will also help you re-create the scene in your post processing workflow. Because you’ll actually remember what it looked and felt like when you took the shot, giving you a great reference to process from.

Until the moment the sun peeks over the horizon and bathes the scene in it’s warm golden light, you’ll be photographing in some very low light conditions.

This is great for shooting long exposures, so make the most of it. It will add another dimension to your image, whether that’s capturing the movement of the clouds, waves if you’re at the ocean, or anything else that creates an interesting effect when photographed in motion.

Sunrises are just too bright, colourful, and full of contrast to effectively capture in a JPEG.

RAW files contain so much more information about the scene that they are essential if you’re serious about capturing the best quality image.

10: Shoot for a starburst effect

One of my favourite things to do on a sunrise shoot is photograph directly into the sun just at the precise moment it peeks over the horizon, or from behind an object in the scene.

Not only does this create great, low light across the scene. But it also creates a really cool starburst effect. To get the sharpest, best looking burst effect, you need to shoot a relatively small aperture (say, f16) and only a tiny part of the sun should be visible. As a general rule when shooting starbursts, the smaller the light source (i.e. the sun), the sharper and less hazy the effect will appear.

If I’d have turned around and gone home every time it was raining on the way to a sunrise shoot, I’d have missed half of my best shots.

No matter HOW miserable the weather is on the way, or how much your lovely warm bed is calling you back to it, you must resist!

When you arrive on location, you might find that the weather really is too bad to photograph in. But if it’s not, then it will probably be some of the most dramatic and potentially most colourful sunrise conditions you could hope for!

Have you ever found yourself running around like a headless chicken, trying to capture an AMAZING sunrise from as many different compositions as you can find?

Have you ever found yourself RUNNING, chest pumping, from the car to the spot you want to shoot from because the colours are already going crazy in the sky and you’re missing it?.

Or have you ever been half way through shooting a sunrise only to look down at your lens to notice its been in Manual focus the whole time when you thought it was in Auto?

The scope of the Photographers Panic is quite broad, so how can you combat it?

It all starts by following many of the points mentioned above. Give yourself plenty of time so you’re not rushed into making a mistake. Know your camera. Be in the moment and really connect with the scene. All of these will help you relax and when you’re relaxed, you’ll capture a great photo.

13: Be prepared to go back and do it all again another day

With all of the above said, sometimes, things just don’t work out. Maybe the weather was a write-off, or you didn’t nail that composition you wanted. Or maybe all your shots were out of focus.

Whatever the case, if you go into every sunrise shoot relaxed in the knowledge that you may have to come back again to get the BEST possible shot, then it relieves so much pressure. And it’s much easier on your photography mojo to fail when you’re relaxed about it than when you fail under the pressure you’ve put on yourself.