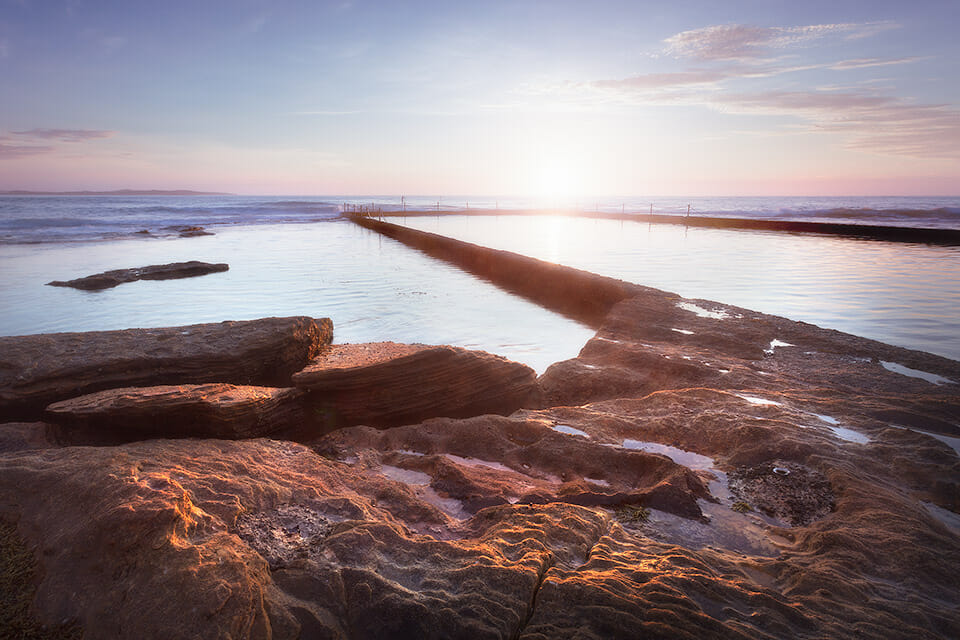 I hope your weekend is off to a good start.

I planned to wake up for a sunrise shoot this morning but after a brutal week in the gym and a couple of sunrise shoots during the week, it wasn’t happening!

I’ll try for a sunrise again tomorrow, but in the meantime here’s a photo I took on Thursday morning.

The sky was quite clear, but there was a lot of sea mist around which softened the sunlight nicely.

It softened it enough that I was able to shoot directly into the sun to create this composition and only needed two bracketed exposures, 1.6 stops apart.

I wanted to keep that bright hazy look and feel to the image, so chose not to darken the sky (which would have given the sky a more saturated look).

The main challenge this created though, was balancing the bright sun and sky with a much darker foreground.

So after tweaking the colours and overall light to get them just right, I set about creating a counter-weight to the sun in the foreground.

To do this, I increased the detail, brightness and contrast in some of the foreground rocks to enhance the effect of the sun shining on them.

This worked quite well because the low angle of the sun naturally created lots of highlights and shadows in the foreground to bring out the detail in the rocks.

And via some creative dodging and burning I was able to enhance that effect, whilst maintaining a realistic look and feel to the image.

As for the rest of the processing, it was simply a case of running the image through my tried and tested workflow.